Recent reports by French senators Yves Daudigny and Catherine Deroche and by Professor Serge Hercberg highlight the public health problems (cardiovascular disease, diabetes and cancer) linked to expanding waistlines. The Hercberg report also notes that, since France’s National Nutrition and Health Programme was launched in 2000, it has not halted rises in excess weight, diabetes or hypertension. The solutions suggested in both reports are based on three lines of analysis: (a) the social cost of excess weight; (b) irrational behaviour by consumers; and, to a lesser degree, (c) social inequalities in health. Instituting new taxes on foods targeted for lower consumption would be the main remedy. Subsidies (financed by these levies) for healthful foods would provide new incentives to encourage their consumption. Nevertheless, both reports note that poor nutrition and its consequences are a complex problem that calls for an entire set of solutions, though they mostly favour tax measures. These are not a panacea, however: their effects on changes in dietary habits are often uncertain, making it hard to pursue the stated goals.

Conclusion
The impact of taxes in reducing the consumption of nutritionally poor foods is uncertain.

While the goals may be laudable (though this is questionable), there is a major risk of applying additional constraints on economic activity without getting the expected public health benefits (in particular, improved results from France’s National Nutrition and Health Program) while nurturing a dynamic of government interventionism that is making French society more sclerotic.  Experts and public authorities tend to depict a black‐and‐white situation, whereas reality is far more complex. Excess weight and the pathologies it leads to are a relatively recent problem in the history of humankind. We still lack the full knowledge that could guarantee an adequate solution.

Although nutrition taxes may appear to provide a response, it is important to understand their limits, especially in terms of a rational approach to avoidance, because the economic costs of these taxes are high in the long run. We should not delude ourselves. In this time of strained public finances, an ulterior motive in the renewed interest in this type of levy is to generate more tax receipts. There are many precedents. President Franklin D. Roosevelt ended the prohibition of alcohol in the United States to boost tax revenues. Due to the Great Depression, Congress had an urgent need for financing, and the best way to get it was to institute taxes on alcohol.

It is always preferable to change the context in which individuals make decisions so that they internalise the externalities they create. In this regard, obesity imposes few or no externalities if individuals bear its costs. We must therefore make sure that incentives for reducing obe‐
sity are in place. Nutrition taxes, by imposing the theoretical frame work of caloric imbalance, would limit the emergence of new ideas that could help reduce excess weight. In the end, we need to show a degree of humility toward the social and biological process. Western society, open and based on free enterprise, dates back only to the late 18th century. It is possible that the human body, after many thousands of years of survival in penury, has not yet adjusted to the abundance generated by capitalism.

To read the full report, please follow this link http://www.institutmolinari.org/IMG/pdf/note0314_en.pdf 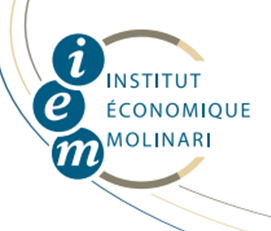